John "Jack" Colbert of the Birchwood Fire Department in Birchwood, WI has died as the result of an on-duty incident that occurred on 2012-04-06 .

Robert Neary of the Philadelphia Fire Department in Philadelphia, PA has died as the result of an on-duty incident that occurred on 2012-04-09

Daniel Sweeney of the Philadelphia Fire Department in Philadelphia, PA has died as the result of an on-duty incident that occurred on 2012-04-09

Kenny Fox of the Decatur County Volunteer Fire Department Station 3 in Decaturville, TN has died as the result of an on-duty incident that occurred on 2012-04-07

Posted by Retired Firefighter at Wednesday, April 11, 2012 No comments:

Posted by Retired Firefighter at Thursday, April 05, 2012 No comments:

Thomas "Bill" Dillion of the Houston Fire Department in Houston, TX has died as the result of an on-duty incident that occurred on 2012-03-14

Initial Summary:
Senior Captain Dillion arrived with other firefighters at the scene of a residential cooking fire. As he approached the entrance to the apartment building he experienced a medical emergency and collapsed. Dillion was treated immediately and transported to the West Houston Medical Center Hospital where he passed away from a cause still to be determined. Incident Location: 7520 Cook Road, Houston, TX

Posted by Retired Firefighter at Tuesday, March 20, 2012 No comments:

Good training video? Stupid is as stupid does. Large compilation of videos of people doing this that keep Fire and EMS  busy. They will find a way. Enjoy!

Posted by Retired Firefighter at Monday, March 05, 2012 No comments:

Mark W. Morrison of the St. Lucie County Fire District in Port Saint Lucie, FL has died as the result of an on-duty incident that occurred on 2012-03-04

Initial Summary:
Lieutenant Morrison passed away while in quarters from a cause still to be determined. During his shift, Morrison had responded to several emergency response calls. After fellow firefighters discovered him unconscious in the firehouse and immediately rendered aid, Morrison was transported to the hospital where he succumbed to his injury. Incident Location: 480 SW Ravenswood LN, Port Saint Lucie, FL 34983

Mark G. Ratledge of the Cottonwood Fire Protection District in Cottonwood, CA has died as the result of an on-duty incident that occurred on 2012-02-29

Initial Summary:
Incident Description: Fire Captain Ratledge was struck and killed by a vehicle while working at the scene of a traffic collision on Interstate 5. Incident Location: Southbound Interstate 5 near the Shasta Livestock Auction Yard

Posted by Retired Firefighter at Monday, March 05, 2012 No comments:

Fire departments are worried as rescues become more dangerous in newer homes. Experts estimate the time it takes to save a house built after the mid-1990s is shorter than in older homes due to the materials used to build modern homes.Last summer, Todd Miller was fighting a fire inside a Blaine house. While crawling on his hands and knees inside the main floor, the unthinkable happened."I opened up the hose nozzle to put the fire out and all of a sudden I could feel the floor start to give way," Miller recalled.In an instant, the floor disintegrated and he was falling through flames as he tumbled into the basement. Against all odds, he managed to find his way through the thick smoke to a door where his colleagues came to the rescue."That light-weight construction, you just never know what it's going to do," said Miller.That house, like thousands of others built over the past 15 years, was constructed using engineered materials. They are light weight, super strong and a big cost savings -- but it seems no one anticipated how dramatically they would change the dynamics of house fires.Firefighters agree that escape or rescue is now a much trickier proposition in newer homes, and the likelihood of massive damage to property is far greater.Communities like Blaine, which have lots of newer homes, have seen the downside of lightweight construction.According to Fire Inspector Jeremiah Anderson, with from the Spring Lake Park, Blaine and Mounds View Fire Department, floors and roofs can collapse rather quickly with the newer building materials.Roofs are built of truss systems with gusset plates holding everything together, but the plates don't penetrate the wood deeply, making them more apt to pop off when they get hot. Also, floor joists are made up of compressed wood, which is much thinner than standard 2x10's. FOX 9 Fire Test. How concerned should you be if your home is made of these new materials? To find out, the FOX 9 Investigators set up a test burn with the help of the St. Paul Fire Department.The experiment involved two different floor assemblies. One used 2x10s and plywood materials that were commonly used in homes built before the 1990's. The other is made up of engineered I-joists capped with chip board, the lightweight construction materials. View Images of the FOX 9 Fire Materials Test The FOX 9 team and St. Paul firefighters stacked concrete blocks about 6 feet high to support the four corners of the floor assembly. Then, a couch was placed underneath to mimic a miniaturized, unfinished basement to serve as fuel for the fire. A mannequin and two hundred pounds of sand were also placed on top of the floor to simulate the weight of a person.In the first test, which intended to see how the modern "lightweight" construction materials held up in a fire, it only took about a minute before the flames from the couch reached the support beams of the floor. After another 45 seconds, the floor was burning as if it had been doused in gasoline. The flames chewed through the beams in about 2 minutes, and then one of the beams broke apart.After about four minutes, the floor could no longer support the weight of the test dummy. It fell through the floor so quickly even St. Paul Fire Chief Tim Butler was surprised."This was like burning a piece of gasoline," he said. "Almost every home built in the last ten or fifteen years is constructed just like this."The second test burn also used a similar couch as fuel, but the floor in the second experiment was made of solid wood 2.10s, not engineered I-joists. These were common construction materials in houses built before the mid 90s -- and there's a huge difference between the two tests.In the second controlled burn, it took about 9 minutes until our dummy on top of the floor fell through -- more than doubling the time the lightweight materials could withstand. What Can You Do?So what should you do if your house is built with lightweight materials and not legacy lumber?Fire Chief Nyle Zickmund retrofitted his house in Blaine with sprinklers. A few years ago, his fireplace overheated and ignited some materials inside a wall. The fire then spread to the engineered truss system that supports the floor. However, thanks to the sprinklers, the damage to the chief's home wasn't nearly as bad as it could have been."With this system, we could have a sprinkler-controlled fire here and I'd still be in the house tonight," said Zickmund. The cost of installing a sprinkler system in new home construction can average about $1 to $1.50 per square foot, but the estimates rise to between $3 and $3.50 for existing homes. Fire officials say there is a misconception about sprinklers all going off at once in a home and flooding the entire house, but that is not true. Sprinkler systems are designed to activate by individual sprinkler heads, meaning only those near the heat source would activate, specifically dousing the area of the fire.Homeowners with unfinished basements can also put sheetrock on the exposed floor joists in order to reducing the time flames could get into those areas in the event of a fire. Smoke Detectors Perhaps now more than ever, it's important to make sure your home has working smoke detectors. As the FOX 9 Investigator's experiment so graphically demonstrates, houses made of light weight construction materials can burn much faster than those built of legacy lumber, and a smoke alarm gives you a much better chance to get out quickly. Read the whole story at Firefighter Close Calls  and at My Fox Twin Cities

Posted by Retired Firefighter at Tuesday, February 07, 2012 No comments:

Initial Summary:
While returning to the fire department, Fire Chief Flint passed away from injuries he suffered in a motor vehicle crash when another vehicle coming from the opposite direction crossed over the center line. Assistant Fire Chief Sharon Petri, a passenger who was riding with Flint at the time of the accident, was injured and remains hospitalized. Investigation into the incident continues by local and state authorities. Incident Location: 6-N East of Fry Road (USNG: 17T NG 6944 3688)

Posted by Retired Firefighter at Sunday, February 05, 2012 No comments:

A Blog about Firefighting News, Information, Politics and Training

Much to do about nothing

Plowing the internet with links, comments to odd and interesting news, also visit www.firefightersfdblog.blogspot.com so you may see it here or there. 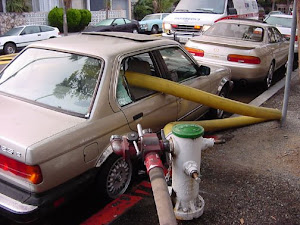